My boy has a safe word. Its purpose is to give him a guaranteed way of calling a halt, or just slowing down, anything he has a problem with.
Most of the time he doesn’t need to use it but I feel better for knowing he has the option. It provides a more graceful response than merely dropping out of role and somehow keeps me closer to him through something which otherwise would be a severe disruption to our play.

I have realised though, that as a Domme I have no such option. There is no subtle way for me to express discomfort with a situation. You might think that a Domme has no need of a safe word, after all they are the one in control aren’t they?
Yet I have found situations in which I have felt uncomfortable. I have been fortunate so far in that they have been ones in which I can simply walk away and that Mat has been sympathetic to my feelings. Still, I can imagine scenarios in which I need to call a halt, in which I need comforting and reassuring. Currently I have nothing I can say to signal this.

I guess that doesn’t sound very Domme-ly but I figure even Dommes have a right to feel safe, to have limits and sometimes even get cuddles and cake.
That’s OK right? Or is it just me?

I awoke feeling dreadful. In fairness I wasn’t so much hung over as still slightly drunk. I didn’t really have much of a headache but my day at work was clearly going to be a challenge.

Perrin got up and made me this before I went to work. Thus fortified I made it out of the house albeit shakily.

I’d grabbed a couple of tablets before leaving the house and gratefully dropped them in a glass of water when I got to work.

I had clementines to eat at work and a fizzy vitamin C tablet which went into the mix with the painkillers. Sitting at my desk I downed the mixture and began to feel better.

Mid-morning I wandered out to the rather dodgy burger van across the road. Supplied thus with both fresh air and a well stuffed bacon roll I returned to my office. While I sat munching at my desk I decided I might as well attempt to complete the cure while still at work.

My trusty Lelo was to hand as usual so I headed off to the toilets for a few moments of privacy. Leaning back against the wall I allowed my mind to wander…

I was out with Mat at a play party somewhere. I tied him to a bench. He was naked, bent over, legs spread. His head hung down slightly over the far end. Arms and legs fastened in place, he couldn’t move.

I moved back to sit down nearby. I watched as people moved forward to read what had been written, to run their fingers over his naked flesh, over the words inscribed there. I watched as a man unzipped his trousers and forced his cock into my boy’s mouth. A Domme in a strap on moved in to take him from behind. Around him were a crowd of people, men and women, wanking, watching, waiting their turn.

…I saw my Boy used and abused and I came.
Eyes opened slowly, reality returned. I went back to my desk with a smile and feeling so much better.

It was simple enough. My car was at the garage so I had asked Mat to drop me off at work. It was a little out of his way but he could drop me off, head off himself and return to pick me up without too much disruption to his day.

As my work day ended I began to pack up my things slowly. I didn’t rush, I knew Mat might be delayed. Still, he might also have been waiting until he knew I had finished my work. I texted him.

When I got him alone later my aim was clear. I wanted to make sure he remembered this. With him lying naked face down on the bed I was going to whip him. I started with a soft belt and my hand. Gently at first, there was no rush.

“Do you remember me”? I asked him.

His response was as cheeky as I expected, goading me deliberately. Did he not think I would hit him hard enough? I intended this to be memorable.

I continued spanking him then moved on to the long crop to whip him in earnest until he assured me that he did remember me.

“Let’s try another memory test” I suggested “can you remember your safe word”?

The strokes fell thick and fast now. He began to squirm. Twisting his body to get away. I put my hand on the small of his back and continued. His guesses were as random as might be expected but I didn’t need to let up now. He could stop me if he wanted to, all he had to do was remember.

Finally, with perfect timing and subtle grace he showed me that he remembered. One phrase, one happy and satisfied Domme and one very sore bottom.
I checked by having him sit down for a moment on his scratchy mat, his face twisted in pain said it all. Yes, that would give him something to remember me by for a little while.

I wonder if he’ll forget to pick me up again?

I’m craving submission; my boy’s submission to me.
I’m longing for his abandonment to his senses.
I’m dreaming of seeing him wild and passionate and lost in the pleasure of the moment.
I’m lusting for the feel of his body under my hands and the resistance of his boy-cunt as I push my strap-on deep inside him.
I’m aching to pin him down and wrap my hands around his throat and watch as he surrenders his breath to me.
I’m yearning for each whimper, each gasp he makes as I take him and hold him.

I’m wanting the rush of pleasure that comes from knowing he’s mine.
I’m needing the release that comes from being purely with him in the moment; his Domme, his owner, his lover.
I’m craving my boy.

I recently turned my boy into a word cloud and I enjoyed it so much that I wanted to write on him again. This time I wanted it to be in public, where the words I wrote could be seen by people being written and be read afterwards.

We had been invited to attend a party and I had planned to use that opportunity to do just that. There was a beautiful bench in the centre of the room and I arranged my boy over it, fastening his wrists in the cuffs which were so thoughtfully provided. I began by spanking him gently, with my hand and the leather paddle. I moved on to the flogger for a few brief moments and then pulled out my sharpie and began to write.
Mat laughed softly when he realised what I was doing. As I continued to work he became curious to know what I was writing.
“A poem” I told him; continuing to focus on writing the words I had composed earlier in the week, memorised for this moment.
As I wrote I was distantly aware of people’s interest, of their murmured whispers of curiosity. Still I concentrated on my task – there was no way to erase mistakes – until I had finished, then I stood back and let others read my words.

Finally I untied my boy and took him to one side to recite to him what was inscribed on his back. Something both intimate and public. 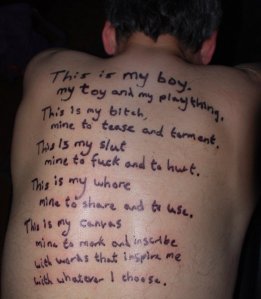 This was in effect my first ever piece of performance poetry. Mat had been encouraging me to share my poetry more widely for a while but I don’t think this was quite what he had imagined. The positive reaction I got was really touching. I shared my words and my feelings and they felt appreciated and understood.
Best of all, Mat wore my words proudly all evening and I did my best not to smudge them.

The photo was taken in the dark, so here is the poem more clearly.

This is my boy,
my toy and my plaything.
This is my bitch,
mine to tease and torment.
This is my slut,
mine to fuck and to hurt.
This is my whore,
mine to share and to use.
This is my canvas
mine to mark and inscribe
with words that inspire me
with whatever I choose.

This blog is a place to discuss relationships, sex and kink. if that sounds like fun then come right in.

- Thoughts in the twilight -

The Edge of Vanilla
Masculine Submission

The Prattlings of a Pervert
Changing Views